Pittsburgh Penguins superstar Sidney Crosby has been cleared to return to the teams morning skates today by team doctors. 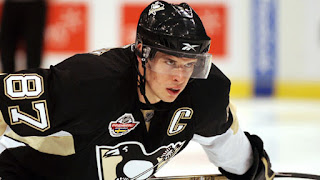 What does this mean for the Penguins? Well, this is just one more very important step that Crosby is taking to eventually return from his concussion.  Unfortunately, he is just returning to the teams morning skates, and not their full practices but this is still great news for the Penguins and their fans.
When GM Ray Shero made the announcement, he also mentioned that the team does not expect Crosby to return during the regular season which would mean he will most likely make his return in the playoffs.  If that was not the case, there would be no reason for him to even practice at all.
Before Crosby was injured January 5th against the Lightning, he was leading the league in scoring with 32 goals and 34 assists in just 41 games.
Posted by Evan at 3/30/2011 12:58:00 PM 3 comments: 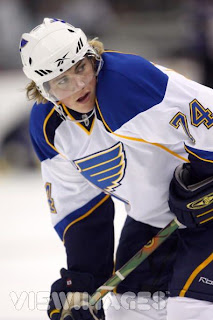 The former first round pick will miss Tuesday's game vs. the Wild and Wednesdays game vs. the Red Wings.  Fortunately for Oshie he will not be fined, but this will shorten an already abbreviated season.  He missed 31 games due to a broken ankle he suffered November 10th.
This is just a dumb mistake on his part.  Even though the Blues are out of playoff contention there is no excuse for not showing up to practice.  Its good to see the Doug Armstrong is not afraid to dish out punishment.
Posted by Evan at 3/29/2011 05:18:00 PM 7 comments:

It is one of, if not the most thankless job in sport. The referee. There is perhaps no single word that garners more hatred and disgruntlement from sports aficionados. 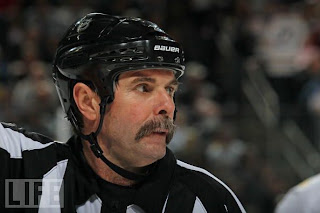 It is impossible to be involved in sport and agree with the men and women in the stripes and whistles all of the time; for some, they tend to spend every waking moment in disagreement with the officials’ rulings.
On over 2000 separate occasions in the National Hockey League during the last 26 seasons, Bill McCreary has been the recipient of profanity-laced tirades from coaches, players and fans, and has taken it all in stride. Sometime in early April of this, the 2010-11 campaign, McCreary will flip the puck, then drop it for the final time.
“I’m quite happy when my last game will be taking place, but I still think there’s going to be mixed emotions,” McCreary said, “because after 29 years it’s all you’ve known in your life and its coming to an abrupt halt. That being said, with a month to go, winding down very quickly, you’re starting to realize, at least I’m starting to realize and accept that yes it is coming to an abrupt end.”

Today Penguins enforcer, and noted NHL villain, Matt Cooke received a suspension that will cover the rest of the regular season and the first round of the playoffs. A suspension of such length covers at least 14 games and at most 17. 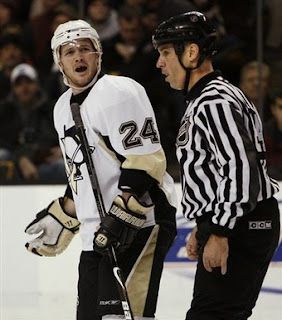 Last Sunday Cooke delivered an unnecessary elbow to the head of New York Rangers defenseman Ryan McDonagh. It has been implied that the NHL is using this hit as an example as Cooke is a repeat offender and the hit showed intent to injure. Cooke will forfeit over $200,000 in salary


The Penguins general manager Ray Shero offered this statement:
“The suspension is warranted because that’s exactly the kind of hit we’re trying to get out of the game. Head shots have no place in hockey. We’ve told Matt in no uncertain terms that this kind of action on the ice is unacceptable and cannot happen. Head shots must be dealt with severely, and the Pittsburgh Penguins support the NHL in sending this very strong message.”

As a Pens fan, I am disgusted and disappointed with Cooke. He deserves every punishment the NHL offers him.

Tonight's literary gem comes to us from Penguins power forward Eric Tangradi, who is dealing with some tough decisions apparently...

Will you be seeing your team in the playoffs in just under a month when the NHL concludes its regular season April 10th? 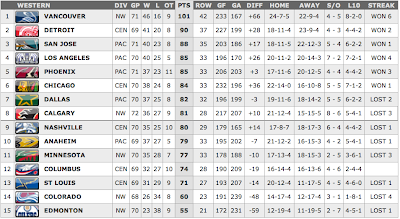 Jake's Take: Violence in the NHL

If you've been paying attention to the hockey world (I would assume you have considering the site) than you know of the unfortunate accident between Zdeno Chara and Max Pacioretty. As an objective fan of hockey and as someone who has played the sport for most of his life, I can tell you one thing I have learned throughout all of my experiences.
Shit happens.

It is a terribly unfortunate accident that Max Pacioretty broke a vertebra and may be out for the rest of the season, let alone his career, however, after watching the video countless times, Chara showed no intention of hitting Pacioretty into the meridian. It was an unfortunate circumstance that is all too familiar in hockey. 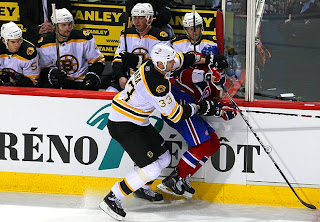 Which brings me to my next point.

Violence in the NHL sure has seemed to be getting a lot of attention in the NHL ever since the season hit midway through this year. Now, as some of you know, I am a die-hard Penguins fan. I love the team, the organization and just about everything about them. I’ve grown up with them; my father has grown up with them and as most of you know my brother has grown up with them. So, while I may have a few certain biases to the Penguins, I leave them at the door when I am either on Ice Talk or on this site. I tell you this because of the subject we’re on.

Make the jump for more of my take

The Beauty of Twitter in the NHL, Pt.2 [UPDATE]

Today's Twitter gem comes to us from Edmonton Oilers rookie star Taylor Hall. Hall is out for the rest of the season with an ankle injury, which gives him a lot of time to tweet...

This year it's an ankle injury, but next year? Carpal Tunnel.

The Playoff Picture Part I: THE EAST

Will you be seeing your team in the playoffs in just under a month when the NHL concludes its regular season April 10th? 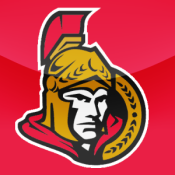 (Sorry Ottawa Fans...)
This is part one of out two part series looking at the playoff picture.  Part I features the Eastern Conference and Part II will look at the Western Conference.
Read more »
Posted by Evan at 3/13/2011 08:25:00 PM 2 comments:

The NHL has issued a statement that Tampa Bay Lightning defenseman Pavel Kubina has been suspended for 3 games after elbowing Chicago's Dave Bolland in the head.

Kubina will forfeit close to $61,000 in salary.  He will be eligible to return March 17th vs. Montreal.

This hit comes just 2 days after the Zdeno Chara-Max Pacioretty incident.  To me, I think it is ridiculous that Chara doesn't get any kind of suspension seeing he put Pacioretty in the hospital and Kubina gets 3 games for an elbow that doesn't even get called as a penalty.  Now don't get me wrong, I think Kubina should be suspended, I just also feel like Chara should have been disciplined as well.

You can see the Zdeno Chara hit here.

Today, the Pittsburgh Penguins and head coach Dan Bylsma have agreed to a 3 year contract extension.  This deal will keep Bylsma with the Penguins until the 2013-14 season. 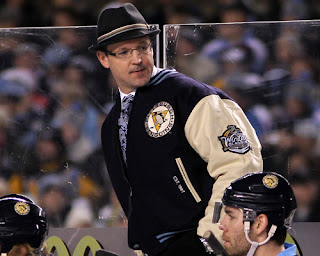 Chara Thugs it Up in Montreal (UPDATED)

Tonight in the Bell Centre, home of the Montreal Canadiens, the Canadiens hosted the Boston Bruins for a much anticipated Original Six matchup, but with 20 seconds left in the second period the focus quickly shifted from the game at hand to the health of Montreal forward Max Pacioretty.

Boston captain Zdeno Chara delivered a controversial hit to Pacioretty in front of the Bruins bench which pushed the forward headfirst into the divider between the team benches.


The only question now is if Chara will face suspension, and if so, how many games could he miss? Personally, I don't think Chara had the full intention of putting Pacioretty into the divider, but still he is expected to be more responsible with his hitting as a captain and a respected veteran of the league.

UPDATE: Chara will receive no suspension or fine for the hit.

He Makes It Look Too Easy

Alex Ovechkin is one of those players that when he's on, he's on.  He showed that last night in the shootout against the Tampa Bay Lightning...

Ovechkin has helped the Capitals take the 3rd spot in the Eastern Conference.  With 13 points in his last 10 games, he has been playing some great hockey to help Washington remain a force in the East.
Posted by Evan at 3/08/2011 12:53:00 PM 3 comments:

New York Islanders forward Trevor Gillies has been suspended by the NHL again, this time for his hit against Minnesota forward Cal Clutterbuck.

The hit came just minutes into the game.  That was also Gillies first game back from a 9 game suspension in which he was suspended for elbowing and fighting Penguin's forward Eric Tangradi.  Gillies will forfeit close to $61,000 in salary.
Because this is his second offense in such a short amount of time, I would imagine Gillies is on his last straw with the league.  Once he comes back I'm sure it's only a matter of time before he does something stupid.
Posted by Evan at 3/05/2011 08:09:00 PM 10 comments:

In my recent studies of the popular social media site Twitter, I've noticed several NHL players are starting to hop on and express their feelings, often in comical ways. 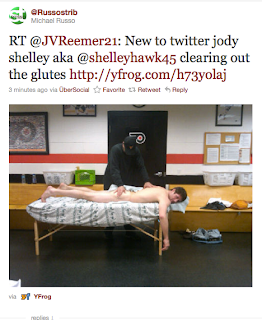 The San Jose Sharks seem to be happy with goalie Antti Niemi.  Happy enough to give him a 4 year extension. 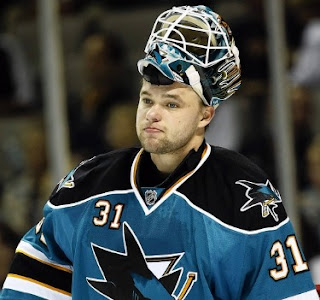 Niemi, now signed through the 2014-15 season, is 23-15-3 with a 2.44 GAA and a .919 save percentage in 42 games.  He has 5 shutouts this season and has secured the #1 starting job on the Sharks after the departure to Evgeni Nabokov.
Niemi won the Stanley Cup with the Blackhawks in 2010 so the Sharks are hopeful that his veteren presence can guide them deep into the playoffs this year.
“This guy has a ring on his finger, and it’s very important that he continues to be part of our organization,” said GM Todd McLellan.
Posted by Evan at 3/02/2011 02:02:00 PM 11 comments: