Today I'll show you a couple of tweets from the infamous Phoenix Coyotes fourth liner Paul "Biznasty" Bissonette, who is clearly enjoying his summer break. 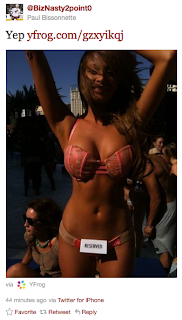 Clearly Biznasty is doing well with his summer endeavors.  Ducks2Nucks supports him and his extracurricular activities.
Posted by Adam at 5/29/2011 05:11:00 PM 2 comments:

By now, you’ve read about the potential of the Atlanta Thrashers moving to Winnipeg by as early as next season.  If you rely on some news sources, the move has already happened and could possibly affect the NHL in a big way.
But probably not in the way you thought.
From the time of its inception the NHL has, like many other leagues, divide teams for organizational purposes.
Now I could start to describe as to why this is important . . . but honestly it’s truly boring.
So let’s dive into the possibilities now that Atlanta has left us and Winnipeg seems to have return to the NHL.
Let’s take a look at the "Ducks to Nucks Awesome Map": 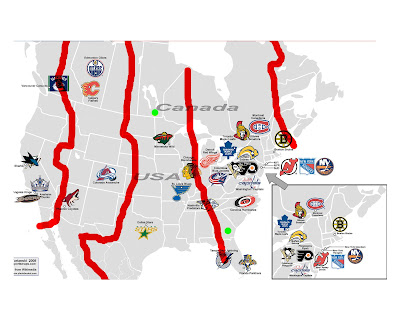 After the Glendale Council voted in favor of keeping the Coyotes for at least one more season, all attention moved toward Atlanta, the next most realistic option for movement.  Unlike most teams, the Thrashers aren't contracted to their arena making them all the more movable, and with the way things are playing out right now, they may have already hung up their skates for the last time. 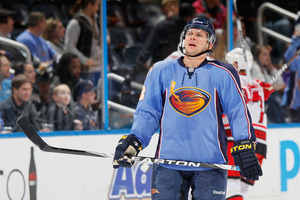 Canada based company True North has been negotiating with the Georgia based group that owns the Thrashers, Atlanta Spirit.  As things stand, it looks as if Winnipeg will finally get their team back, and Atlanta will have played their final game as an NHL franchise in a bittersweet turn of events. 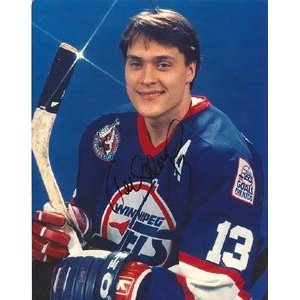 Only four teams remain.  These two series will determine who reaches the Stanley Cup Finals.  Here are mine and Adam's Predictions.

(#3 Seed Bruins)                      (#5 Seed Lightning)
Evan's Prediction: Lightning win in 6.
Adam's Prediction: Bruins win in 6
Our Take:This series could prove to be a battle of the elderly goaltenders. Adam thinks that the Bruins Tim Thomas has the stamina to outlast Tampa's Dwayne Roloson.  The Lightning have offense on their side, but Boston has experience and a grittier defensive core. This will be a great series.

Minnesota Wild prospect Mikael Granlund pulled off this amazing goal to give Finland the 1-0 lead over Russian in the World Championship.

The New York Islanders announced that they have resigned rookie sensation Michael Grabner.  The contract appears to be a 5 year deal that is worth $15 million dollars. 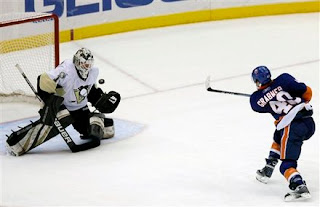 The speedy winger led all rookies and the Islanders with 34 goals.  Grabner announced this deal just hours ago via his twitter.

This deal comes just after the Islanders announced their plans to build a new arena which would replace the 39 year old Nassau Coliseum.  It would appear that the Islanders are getting serious and trying to prove to their fans that they are trying to field a winning team.  The signing of Grabner was a great start to that, as he is a huge piece to the Islanders puzzle.
Posted by Evan at 5/13/2011 12:58:00 PM No comments:

After last nights game, the Vancouver Canucks join the Tampa Bay Lightning and the Boston Bruins in the Conference Final round.  They defeated the Nashville Predators by a score of 2-1 last night and take the series 4-2. 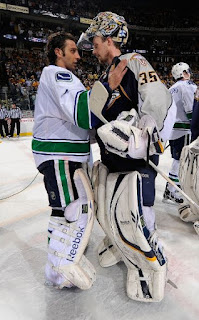 There is no doubt that Nashville goalie Pekka Rinne kept them in this series.  He had an unbelievable series for the offensively challenged Preds.  Without him, Nashville could have easily been swept.
Read more »
Posted by Evan at 5/10/2011 01:13:00 PM 5 comments:

On Phoenix and the Potential Move to Winnipeg

In case you haven't noticed, the Phoenix Coyotes aren't exactly the poster team of the NHL.  In fact, the Yotes rank 29th out of the 30 teams in attendance for the 2010-2011 season even though they statistically had their second best season in team history (43 wins, 09-10 season had 50 wins).  Such a difference between team production and fan attendance clearly raises many questions with the NHL.  The most important of which being, should the Phoenix Coyotes stay in Phoenix or should they be moved? 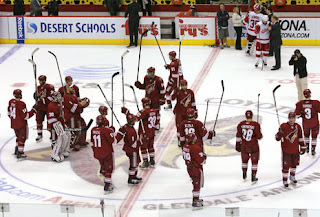 At this point in time, a potential move for the team from Phoenix to Winnipeg is very possible.  Winnipeg has shown that they would eagerly accept another team (Their last team was the Winnipeg Jets who became the Phoenix Coyotes in 1996).  To move a team from Winnipeg to Phoenix and then back to Winnipeg ultimately seems like the NHL admitting to making a mistake, but really it's just financially what the league may have to do.

I won't delve too far into the technical aspects of the move at all, but honestly, I support the relocation.  I always liked the idea of Canada having another team, and maybe now it's Winnipeg's time.  The Coyotes were a loveable team of underdogs, but sometimes that's not what gets fans in seats, sometimes it's just as they say in the real estate business...

Some Goal Celebration Pics are Better Than Others?

Last night the Boston Bruins eliminated the Philadelphia Flyers in a four game sweep with a 5-1 blowout. Leading the charge was power forward, Milan Lucic, who had two goals and was a plus one on the game. Out of Lucic's offensive playoff breakout came this picture, taken almost immediately post-goal. 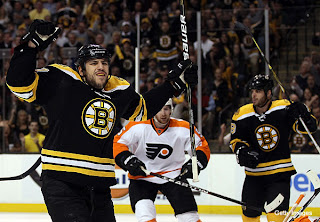 Decent photograph. Two B's celebrating with a single greiving Flyer in the background, but it could be closer to Lucic I think...

Improvements after the jump... 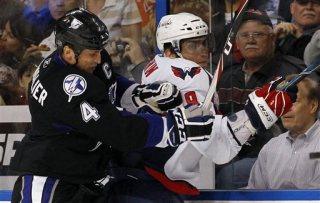 Well, it’s May. The sun is shining, the grass is growing and the Capitals are out of the playoffs.
Again.
For about the fifth year in a row.
Reread that a few times to really get the feeling of that. This is the team that has won their conference multiple times. This is the team with Alexander “the Great” Ovechkin and Mike Green. Multiple sources, including Greg Wyshynski of Yahoo’s Hockey blog Puck Daddy, will point the blame at coach Bruce Boudreau and avoid blaming the players.
But guess what?
Boudreau isn’t the one out on the ice. Boudreau can’t force the players to play better. They need to go out and win. Not play to lose, but play to win. Boudreau has an awesome quote to some up the entire Capitals organization.
“I have never seen a bunch of guys look so [expletive] down when something bad happens.”
Every time the Caps start the season, they are on top of the world and chomping at the bit for a Stanely Cup victory. And every time they face the slightest adversity, they fold harder and in a more stunning fashion than the year before. Every player seemingly gives up once the going gets tough. It’s embarrassing. They talk a big game, they win the regular season and that’s it. No guts; no glory. Just another May spent on the golf course or in Russia or wherever. If the organization is looking to fix this problem, they need to address one man.
Alex Ovechkin. 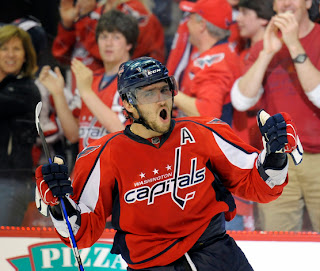 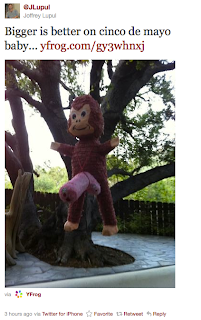 Throwing cultural sensitivities to the wind, Lupul tweeted this celebration of paper mache and crude humor, and for that I thank him.

Tonight the Tampa Bay Lightning did what nobody thought they could do.  They completed a four game sweep of the Washington Capitals.  What makes this sweep taste all the more bitter for Caps fans is the fact that yesterday star forward Alexander Ovechkin promised reporters a series win out of a 3-0 deficit. 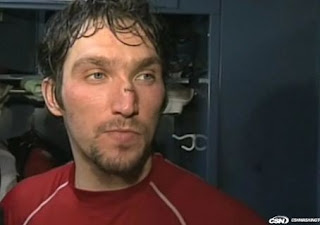 “It’s not over. We don’t give up. We’re gonna win... They win three, we can win three.”
The Lightning overall outplayed the Caps in every aspect of the series and just seemed to want the wins more than Washington.  The Capitals become the first number one seed since conference playoff format started in 1994 to be swept in first or second rounds.

Also tonight in playoff news, the Bruins increased their series lead over the Flyers to 3-0 with a 5-1 win, and the Sharks won in Detroit in overtime to go up 3 games to none on the Red Wings.

After some confusion, the Bruins have taken a commanding 2-0 series lead against the Philadelphia Flyers. 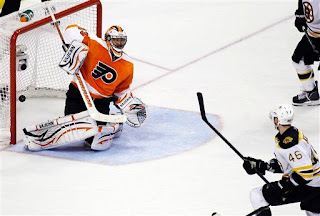