Fans of the Pittsburgh Penguins remember what occurred on February 11th of this year. They remember Matt Martin applying a sucker punch that barely missed the skull of Max Talbot. They remember Trevor Gillies throwing a flying elbow into the face of Eric Tangradi, and then continuing to throw punches on the defenseless winger as he lay on the ice. They remember Michael Haley goading Brent Johnson into his second brawl in nine days, and Eric Godard coming off of the bench to protect his goaltender. 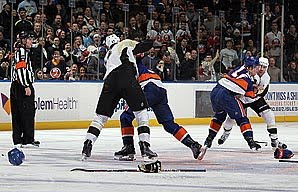 The massacre on Long Island is still fresh in my mind, and I imagine I am not the only fan of the flightless fowl that shares these vivid images. That game was scary to watch. It was frightening to come to the realization that what I was witnessing was not hockey; not the game I love, but a gongshow that has no place in professional sports.

The thing that scares me now is that there is still one more visit to Long Island looming on the calendar. Friday night, the Penguins will faceoff at the Nassau Veterans’ Memorial Coliseum in Uniondale, New York, against the Islanders. 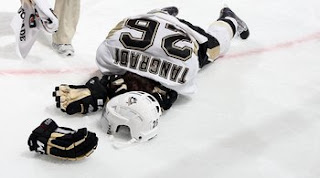 It’s not that I’m not scared of playing the Isles and being concerned as to what the scoreboard will read at the conclusion of the contest. I’m instead worried about what the penalty columns will look like on the final box score.

Now it should be noted that when there is hype leading up to a game as far as the potential for goonery is concerned, nine times out of ten those concerns turn out to be obsolete. Take Matt Cooke’s first game against the Bruins after the Marc Savard hit. On Cooke’s first shift of the game, Boston sent out their enforcer, Shawn Thornton, to fight Cooke. Number twenty-four obliged, and that was the end of that.

In other instances, that is not case: case in point, February 11th. The Islanders made it publically known that they were not happy with Max Talbot and Brent Johnson’s actions nine days earlier, and had plans to do something about it. However, anyone that claims that they saw the preceding events coming is telling a lie larger than Zdeno Chara. Nobody could have predicted what transpired, and because of that game, I am not in the slightest looking forward to facing the joke of an organization once more.

Is my fear unnecessary and foolish? Perhaps, but I promise I have justified reasons for my concern.

The four main players for the Islanders that took part in the original shenanigans, Matt Martin, Trevor Gillies, Zenon Konopka and Michael Haley, are all still on the team’s active roster. What’s to keep Jack Capuano from dressing all four?

Secondly, the Islanders have nothing to play for. The playoffs are not an option for the team, so what would the aforementioned skaters care if they partake in suspendable actions at this time of year?

I would be willing to bet my Penguins’ season tickets that the league will have a nice chat with both clubs prior to the commencement of Friday’s contest, but will the Islanders heed their warnings?

The organization continues to partake in one bombshell after another, from the Evgeni Nabokov mess, to the firing of their writer Chris Botta without an official explanation, to owner Charles Wang’s continued failed attempts to receive support for a new facility on Long Island, to the brawl on February 11th in which Martin and Gillies were suspended for their actions, and the organization as a whole was fined $100,000. The New York Islanders have been a constant embarrassment for the NHL this season; what’s one more black eye?

Meanwhile, the Pens are currently vying for the top spot in the Eastern Conference, and are gearing up for what is hoping to be a long run into the springtime. With Evgeni Malkin gone until September and Sidney Crosby’s playoff status still up in the air, the team simply cannot afford to incur any injuries or suspensions as a result of what could happen on April 8th. Dan Bylsma’s squad would be foolish to oblige the Islanders in any kind of foolishness; but then again, if your teammate is being attacked, you’re certainly not going to take the role of bystander.

This is why there are a few ounces of fear pulsing through my brainwaves as the rematch nears. Yes, I realize that there is probably a better chance of Matt Cooke being invited to teach small children how to apply a legal bodycheck than there is of similar shenanigans occurring once again between the two Atlantic Division foes, but I have a hard time pushing the concern away.

After all, the images of Trevor Gillies acting like a barbarian are still fresh in my mind.