It was do or die for the Los Angeles Kings last night.  Win and they force a game 7, lose and they're done until October.

Sharks 4 vs. Kings 3 (Overtime)
The game was a constant back and forth battle as both teams traded goals until overtime.  Kyle Wellwood, Jason Demers, and Dany Heatley scored for the Sharks while Justin Williams, Ryan Smyth, and Trevor Lewis scored for Los Angeles in regulation.  In overtime, the Sharks looked to their leaders, and Joe Thornton did not disappoint: 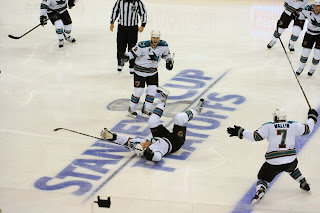 Here is the goal:

San Jose joins Detroit, Nashville, and Washington as the only teams to win their series so far.
Tonights games feature two game 7's, both of with will be broadcasted on VS.  The match ups are Buffalo vs. Philadelphia, and Vancouver vs. Chicago.
Posted by Evan at 4/26/2011 05:30:00 PM