Well folks it’s that time of year. Time for beards to be growing and blood to start flowing. (yes I know it rhymed and I’m damn proud of it.) 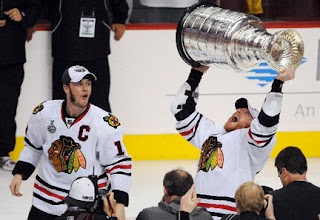 Now I know this post is coming a tad bit late, but I plan on giving my insight into the future of the 2010-2011 Stanley Cup Playoffs.


-We’ve already seen the amount of power the Caps have in their line-up even with the great 8 not being too great. However, other players like Alexander Semin (who often does a better job than Ovechkin) have really stepped up, especially in this series. Also, with the return of Mike Green expect more offense. Clearly this one is already in the books. I would love to see King Henrik Lundquist rise above the caps but it’s just not going to happen. NY has a decent defensive core with players like Michael Del Zotto and Marc Staal but it won’t be enough to stop the Caps this year.


-No one would have guessed this series would be tied considering Buffalo’s current condition. That condition would be the fact that aside from Tyler Myers, Thomas Vanek and of course the star-spangled hero Ryan Miller, the Sabres have the Sunday night crew from Denny’s fill in for the rest of the team. However, I think the Sabres could truly make this series interesting and I would not be surprised to see them fight the Flyers until they can’t fight anymore. There for I’m saying the Sabres will upset the Flyers.


-If you’re not watching this series then the Bruins bear will find you and kick the piss out of you.

-I digress; this is one of the best series I have watched so far. Montreal’s maddening tactic of allowing the other team to strike often and then pounce on the defensive break has proven true again. Nothing against Carey Price or Jaroslav Halek, but I feel the Canadiens have found a playoff system that is really affective. For whatever reason, despite the lack of logic, this system works again and again. I soooooooo desperately want to say that Boston will turn things around, but this plot is so predictable it could have been a Rocky Movie. You know who’s going to win in the end. Montreal will, yet again, defensively sneak their way past yet another opponent.


-As you know, my brother and I are both huge Pittsburgh fans. So this one is really tough to stay objective on. I really, really, really, really believe this series comes down to one man... Sidney Crosby. It’s cliché’, it’s overstated and it’s annoying as hell to hear about but if Crosby comes back it could have HUGE implications, both good and bad, on the entire series. Sid hasn’t played in what seems like years and everyone knows players need a few games to warm up to everything again, especially after an injury like a concussion. So, I actually think the Pens have a better chance if Sid waits on this one. Give him time to heal or even play him on the fourth line. But I think if the Pens play him centering Alex Kovalev and James Neal (two players he has never been line-mates with) I think we won’t see King Sid, but Sid the Kid, who passed a tad bit too much and didn’t shoot enough. Without Crosby, the Pens need to play their game: smash-mouth-in-your-face-hockey. Punishment should be dealt like confetti in a ticker tape parade. If Malone gets in Fleury’s grill, someone should flatten him. In fact, this really goes for either team. The grittier team will ALWAYS win. So my final verdict is... the Pens. The Lightning played a hell of a game on Friday, but that’s not their style of hockey. St. Louis can’t hit people the way Neal or Kunitz can. And Orpik simply looks possessed. You know he’ll want blood.


So, in the end here are my matchups with the Semi-finals of the Eastern Conference.


-Washington simply has too much offense to not beat Buffalo. Ryan Miller will stand tall, but one man cannot carry a team that far. Look for Jordan Leopold of the Sabres to be on Ovechkin like white on rice.


-Again, I am not trying to be biased. Pittsburgh had an amazing start of the year and was looking at first place in the East easily. Crosby was putting up more numbers than the IRS on April 15th. With Crosby definitely back in the line-up by then and two scoring wingers in James Neal and Alex Kovalev, it’s going to be tough for Montreal to play their system well. Look for the Pens to utilize their smash mouth hockey in the offensive zone with the fourth line of Asham-Adams-Rupp to really send the message not to mess with Pittsburgh.


EASTERN CONFERENCE CHAMPIONSHIP
#1 WAS –VS- #4 PIT


-Oh brother. If you thought the series between these two was awesome two years ago, imagine what it could be with this. I’m literally feeling sick to my stomach writing this. On one hand, the gritty Pens have played smash mouth hockey without the likes of Crosby, Malkin and half the population of Pittsburgh, while the Caps have been deadly without the power of Alex Ovechkin. No way this series ends before the seventh game. Washington has no defense, but makes up with that with a plethora of offensive talent. Pittsburgh knows how to beat the Caps, and with Crosby in the line-up . . . this is really a toss up for me folks. I am legitimately torn between the two. My heart wants the Pens to win this soooooo bad. But I can’t help but see Washington in the finals.


-Man did the Blackhawks fall flat this year. After an amazing cup run last year, half of the Hawks are back to compete for Lord Stanley’s chalice again. (The other half now residing in Atlanta and practicing their golf swings.) Vanchoker should be able to sweep the limping former champs with no problem.


-Yet another case of choke artists performing well, San Jose started off this series with a commanding overtime win. The Kings, however have managed to stomp the crap out of the San Jose Joes and win with a commanding 4-0 win. It’s finally time to see Drew Doughty live up to the hype. LA is going to the next round.


-Oh Phoenix, you’re like the long lost puppy of the NHL who is so adorable but yips and annoys the crap out of you when you bring it home. Why can’t you just learn? This is the second time the Yotes will face the Wings in the playoffs, and I so badly want the Yotes to win. After all the humiliation, aggravation and overall embarrassment of the entire organization the players and fans deserve to see this time make the second round of the playoffs. I’m pulling for ya Phoenix, and I’ll even go as far to say that they can make the series interesting. But Detroit is a monster and it’s going to take a lot of work. Phoenix gets revenge this year and will knock Detroit out... I hope.


-Both of these teams are excellent candidates for potential cup finalists. Anaheim has breakneck speed and strength from Getzlaf, Perry, Selanne and Ryan while Nashville has the calm assertive defense of Shea Weber, Ryan Suter, Cody Franson and of course Pekke Rinne between the pipes. Everyone loves Teemu and I defy you to find someone who thinks otherwise. However, I think Teemu and the Ducks are going to have a tough time beating this Nashville Team. Defensively stacked, offensively under-rated and a potential star goalie? That’s an easy pick for the next round. Nashville’s moving on.


Here’s how the west breaks down after the first round.


-Roberto El Choke-o is, in my humble opinion, the most over-rated goal tender in the NHL. Yes, he’s big and has some speed, but he allows waaaaaaay too many soft goals to be a great like Patrick Roy or Martin Brodeur. I really believe Dustin 2 Dustin will tear through Roberto I-was-lucky-I-didn’t-lose-to-Ryan-Miller Luongo. However, the Nucks have a steady team of work-horses like Ryan Kesler, the Sedins and Kevin Bieska who are chomping at the bit for a Stanley Cup. Therefore, Luo-fatso will be carried by his teammates past the Kings.


Nashville is PRIME for the cup. If they can get a tad bit more grit into their play, expect them to be looking for the cup soon.


In case you couldn’t tell earlier...
NASHVILLE over VAN-CHOKERS. 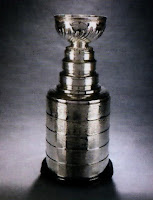 
-Remember Washington’s offense? Of course you do. Remember Washington’s defense? No you do not. Does Washington even have a goalie? Nashville has a cohesive, smart team with defensive core and strong goaltending. Washington has offense, offense, more offense and some offense on the side with stupid penalties thrown into the mix. Don’t get me wrong; I think this will be an awesome series. However, Nashville is way too smart to fall for the pass-to-Ovechkin-or-Semin game. Once they shut them down, Washington has to rely on... Jason Arnott.


But that’s just my take.