It came down to one final game for the Canucks and Blackhawks.  One game to decide who moves on.  Vancouver won the first three followed by Chicago winning the next three.  Game 7 proved to be no disappointment. 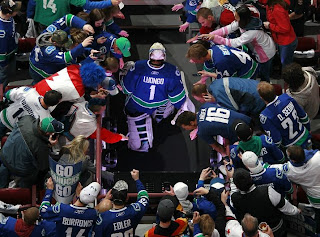 All eyes were on goalie Roberto Luongo as he has proved year after year to be a no-show come playoff.  This year looks to be the same as he had a horrific game 4 and got pulled once again in game 5.  For game 6, Vancouver coach Alain Vigneault turned to backup Cory Schneider.  After losing game 6 as well coach Vigneault went back with Luongo for game 7.  He responded with 31 saves and only 1 goal allowed.
The game got off to a quick start as Alex Burrows scored his second goal of the series just 3 minutes into the game. 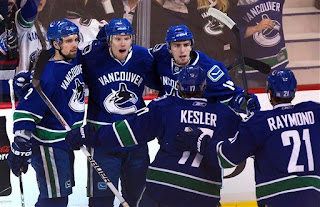 After that goal both teams had a back and forth battle that lasted the entire game.  Both teams were fighting for their playoff lives and it was apparent as the excitement was mounting.
Then, with 3 minutes left in the game, Chicago defenseman Duncan Keith took a hooking penalty to give the Canucks the power play for 2 of the final 3 minutes of the game. 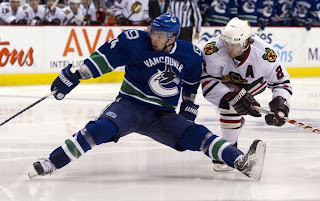 With all hope seemingly lost, the Hawks turned to their captain Jonathan Toews, and he responded with just 2 minutes left in the game:
That incredible goal forced overtime and gave the Blackhawks a ray of hope.  Each team was now one goal away from advancing to the second round.
With overtime underway the tension was mounting.  The players were more careful with the puck as they did not want to make any mistakes.  All it took though, was one defensive lapse from Chicago for Burrows to capitalize:
Vancouver now advances and will play the Nashville Predators first round.  I'm not sure if the Preds and Canucks will be able to top this unbelievable series. 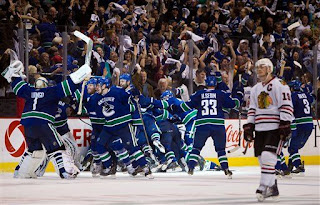